Punctuation, basic English punctuation, punctuation!!!! , . : ; ” ‘ ? ! ( ) – . etc. Oh so complicated at times I hear you say. Well, to make it easier for you to understand in a light hearted way I came across this amusing example the other day:- 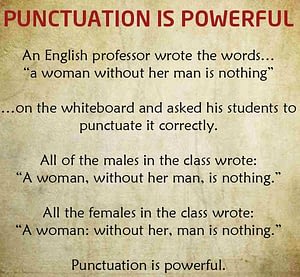 Yes punctuation is really powerful and can change the meaning of a sentence so easily depending on how punctuation is used as you can see from the above words.

So how are the main punctuation marks used?

Represented by a dot .

This is another punctuation mark used at the end of a sentence and asks a question e.g. How old are you?

Yet another punctuation mark used at the end of a sentence usually to emphasise a point being made or a sudden outcry e.g. “Oh my goodness!” shouted Peter or The way this driver drives the bus makes me annoyed!

Usually indicates a pause but can also separate grammatical components of a sentence. A comma used incorrectly or even missing can change the entire meaning of a sentence.

The semicolon is used to connect independent clauses. It shows a closer relationship between the clauses than a period would show. For example: Michael was upset ; he knew she only said it to upset him.

The colon is used after a word in a sentence introducing a quotation, an explanation, an example, or a series of bullet points.

This is a punctuation mark used to join words and to separate syllables of a single word e.g. eye-opener or check-in. The use of hyphens is called hyphenation. The hyphen should not be confused with dashes which are longer and have different uses, or with the minus sign which is also longer.

A dash is a little line that is  longer than a hyphen. Dashes are used to separate groups of words, not to separate parts of words like a hyphen does.

Parentheses (a bit of a mouthful!) are used to contain words that provide a further explanation or further thoughts or relevant remarks. It is often argued that commas could replace parentheses.

Often used for technical explanations but mainly used to enclose words added by someone other than the original writer or speaker, typically in order to clarify a situation.

Also known as curly brackets, are used in various software programming languages, some mathematical expressions and musical notations. They should never be used in place of parentheses ( ) or square brackets [ ].

These are used to mark the beginning and end of something that is said by another person which is repeated word for word.

The single quotation mark is used most frequently for quotes within quotes.

An example of this would be as follows:

She asked, “How many of you have read ‘Gone with the Wind’?”

I have written here very basic descriptions of the various punctuation marks in English which I hope has helped. If you require more detailed information then of course there are other sources of information however one source that I highly recommend may be found here 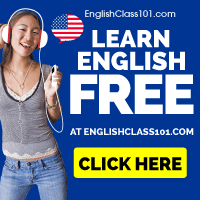